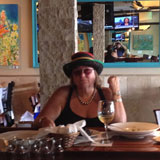 Cowan, Barbara Anthonsen On March 6 2015, of East Boston. Beloved wife of Richard Lance Cowan of East Boston. Dear daughter of the late Edward Anthonsen and Eleanor Hasenfuf. She was the loving sister of Margaret Hogan and her husband Bobby of Watertown and Susan Dukeman and her husband Bill of Milford. Barbara was the loving aunt of Michele Vincent and her husband Peter of Belmont, Shannon Hogan of Watertown and William Dukeman of Milford. She was also the dear great aunt of Peter, Lia, and Charles Vincent all of Belmont. A memorial service will be announced at a later date. Expressions of sympathy in Barbara's memory may be donated to the American Cancer Society   . Joseph R. Frazier Funeral Home Winthrop, MA 617 846-0050 -

You can see some of Barbara's artwork at her site: http://barbaraanthonsencowan.com/